Saint Francis of Assisi: A Biography 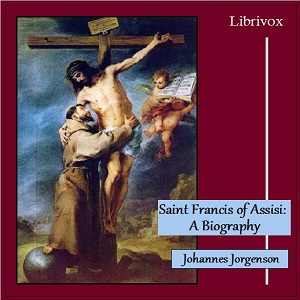 Saint Francis of Assisi: A Biography

LibriVox recording of SAINT FRANCIS OF ASSISI: A BIOGRAPHY, by JOHANNES JORGENSEN. Read by Dave7.

Born to a prosperous cloth merchant of Assisi, Francis (1182-1226) lived the typically high-spirited life of a wealthy young man of his day, which included fighting as a soldier. In 1205, while away at war, he experienced a vision that beckoned him return to Assisi, where he soon lost his taste for the worldly life and began to live a life of evangelical poverty in imitation of Jesus Christ. He embarked upon a pilgrimage to Rome, where he begged for alms alongside the poor at St. Peter's Basilica. Upon his return to Assisi, be began to preach in the town square and soon acquired a curious following which blossomed into a worldwide religious order. The Franciscans sparked a spiritual revival that enlightened the Dark Ages and that continues even into our day.

Johannes Jorgensen (1866–1956) is best known outside his native Denmark for his popular biography of St. Francis of Assisi, which he wrote in 1907. As a student in Copenhagen, he searched in vain for truth in various secular and spiritual philosophies. But his 1894 visit to Assisi, with his friend Mogens Ballin, a Jewish convert to Catholicism, led to a turning point in Jorgensen's own spiritual life and quest for truth and marked the beginning of his fervent love for Francis, a love that became the preoccupation of his life and led to his conversion to Catholicism in 1896. His timeless biography of Francis of Assisi continues to inspire readers from all creeds and cultures. (Adapted from Wikipedia)